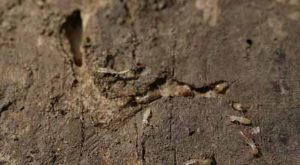 Because of their need for excessive moisture, dampwood termites are not often found in structures.