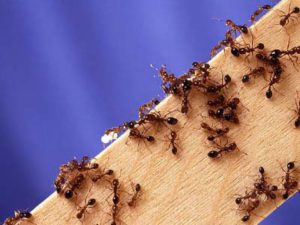 Fire ants can be found in parts of Arizona, but were not originally native to our state. Originally, Fire ants were transported to Arizona in potted plants, bushes and trees, and quarantine efforts were not successful in stopping the migration of this species of ant. Red imported fire ants nest in soil and build mound nests. They can infest garages, or nest outdoors in landscape areas or near a structural foundation. Fire ants will gain entry to a building through holes or cracks.

Fire Ants will build large mound nests, and will sting humans and pets coming across a nest.