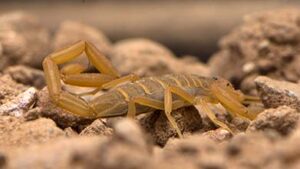 Scorpions are nuisance pests and are also of medical importance because of their stings. Their stings can result in a mild wasp-like sting, which can be complicated by an allergic reaction and can be fatal in rare instances. In Arizona, there are a number of species, however, the Arizona Bark Scorpion is the one of most concern and the most dangerous in the U.S.

Scorpions are nocturnal feeders. They feed mostly on insects and spiders and when water is available they can survive for months without food. During the day, scorpions usually hide either in or beneath something. If door thresholds are missing and/or unscreened windows are left open, they may enter directly into the living space.

Stings are often very painful and are usually followed by immediate distress, including numbness around the wound, weakness or even paralysis of the injured part. Generally, children and the elderly are at risk, especially if found to be allergic to their sting.

Controlling scorpions is a five-step process:

A high-quality pest control program will include the 5 steps listed above; however, scorpions will travel quite some distance, so it is imperative to get your neighbors involved for a successful control of scorpions.

Did You Know? Scorpions…