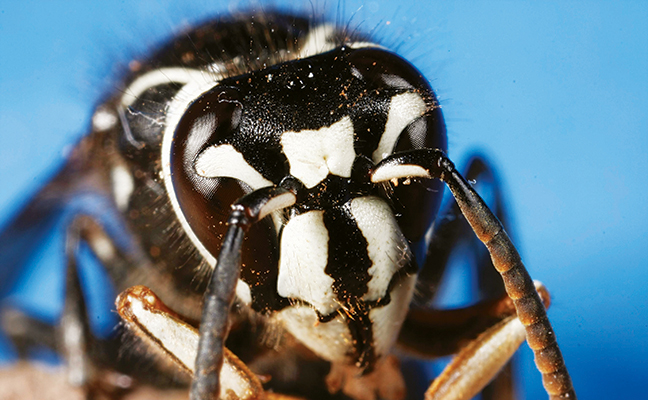 This large black-and-white relative of the yellowjacket gets its common name from its largely black color but mostly white face. It is named a hornet because of its large size and aerial nest.

Bald-faced hornets live in nests with as many as 400 workers and can build them as large as 14 inches in diameter and more than 24 inches in length.

Black with white pattern on face

Bald-faced hornets are social insects, although not true hornets. They live in colonies that may contain between 100 and 400 members at their peak. They usually appear in late summer when populations are largest. Bald-faced hornets build paper nests at least three or more feet off of the ground, usually in trees, shrubs, on overhangs, utility poles, houses, sheds or other structures.

Bald-faced hornets are aggressive and will attack anyone or anything that invades their space. This makes bald-faced hornet removal somewhat difficult. They have smooth stingers, so they can sting over and over again. Their stings also carry venom that makes the stings hurt, itch or swell for about 24 hours. Humans are at the same risk of allergic reactions from a bald-faced hornet's sting as with other insect stings.

Bald-faced hornets are beneficial insects that help to control many pest species. However, if a nest is close to the ground or near an occupied structure, control is warranted. Routinely inspect the outside of your home and any outbuildings for stinging insect nests. If you find a bald-faced hornet nest on your home or property, do not attempt to remove it on your own as this can aggravate the colony and cause them to attack. A licensed pest management professional about hornet removal to avoid the risk of getting stung.