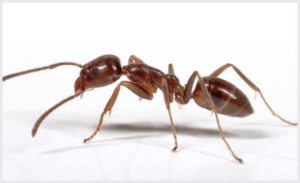 Argentine ants are a common household pest, often entering structures in search of food or water. Attempting to escape flooded nests or humid weather, Argentine ants are likely to find shelter in your home. Though they often live under your home, it’s always a good idea to apply a professional pest control barrier to prevent the expansion of their colonization.

Argentine ants can be found in Australia, Europe, South Africa, Hawaii, Mexico, and the U.S. including Arizona. For help with the identification or removal of ants, give our pest experts a call for an inspection!

Did You Know? Argentine Ants…

Light to dark brown and shiny

Segmented; oval. They have two spines, a head, and a heart-shaped abdomen with an antenna.

Found mostly in the southern U.S., Arizona, California and Hawaii

Argentine ants are social insects that reside in colonies often featuring multiple nests. Unlike other species, Argentine ants are not aggressive toward ants from other neighboring colonies, which allows colonies’ numbers to grow and multiply exponentially. Argentine ant colonies can grow to monumental size. A single colony can contain several hundred thousand workers, with the colony borders sometimes covering entire habitats.

Argentine ants often are found in mulch or soil, nesting only 1-2 inches beneath the surface. They also are found under debris, rocks, and lumber. Indoors, Argentine ants nest in wall voids, insulation and pipes or drains. In the wild, they feed on insects and honeydew; indoors, they are drawn to any food remains, especially sugary foods. Argentine ants prefer to eat sweets, but they will eat almost anything including meats, eggs, oils, and fats. Their colonies are usually found in wet environments near a food source. Outdoors, they usually build shallow nests under boards or stones, beneath plants or alongside sidewalks. When conditions in their natural environment are either too wet or too dry, Argentine ants may seek shelter indoors, where they often nest near water pipes, sinks or potted plants. Argentine ants do not pose a health threat, but they can contaminate food and should be avoided.

Argentine ants are attracted to food residues, especially sugary foods. To prevent infestation, the best course of action is to make sure areas where foods are prepared or consumed are free of all residues. Eliminate any standing water on your property, as Argentine ants are attracted to moisture. Keep tree branches and other plants cut back from the house so ants can't easily travel to your home. Seal any cracks or openings around the exterior of your house, especially where utility pipes and electrical lines enter. Make sure that firewood and building materials are not stored next to your home. Argentine ants like to build nests in moist wood. Often, it is reported that bait containing boric acid is an effective treatment for Argentine ants, with worker ants theoretically carrying the tainted bait back to the nest and exterminating the colony in turn. However, the treatment can backfire if the concentration of boric acid in the bait is too high, causing worker ants to perish before making it back to the nest, rendering the whole treatment futile. For this reason, it always recommended that a trained pest control professional treat Argentine ant infestations. Find out more about ant extermination options.